I published my third book last week, and after a weekend of cookouts and canoeing and boardgames and sleeping in, I'm ready...ready for the next writing project!

I dropped my son off at camp with his friends in town, my wife is at work, the dogs are sleeping all around me, the 'writing' playlist is playing on my iPod, I've had just the right amount of coffee, and I'm in the mood to write a novel...now what? 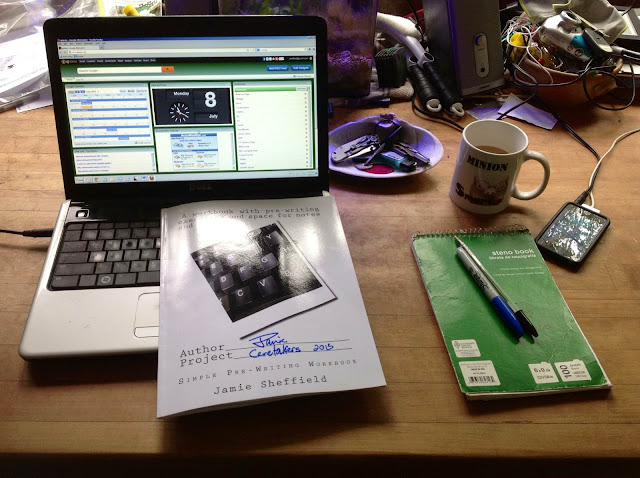 I have a process that works for me, so I thought that I would share a bit about it as I go along in my pre-writing for the coming days and weeks.

A secret that nobody but you knows is that my first book wasn't "Here Be Monsters", it was the simple pre-writing workbook that you can see on my laptop in the picture above.

I was nervous about using CreatSpace to print my first novel without practicing on something less important first, and so reverse-engineered the process that I used to write HBM, and put it all in a workbook that would both allow me to play with the CreateSpace publishing tools, and make a useful tool for subsequent writing projects.

The first five steps are surface/simple, but help to define everything that will come later in the process of writing my novel.

IDEA!
I devote a whole, mostly blank, page to detailing the big picture.  I don't worry about cross-outs or spelling or specifics...I'm just trying to get the idea that has been rumbling around in the back of my head onto paper in some form.  There's a box at the bottom of the page where I try to fit the idea into a single sentence description of the novel (a shorter version of the 'elevator pitch').

Free-Writing for Detail
Another mostly blank page for brainstorming 50-100 words that I associate with the idea on the previous page.  Once I have an idea, these word start spilling out pretty quickly, providing me with some cues for setting and characters and storyline and twists and such.

Place/Setting
The where and when of the novel.  I write a bare-bones description of the places that the novel will take the reader.  I like for the place/setting to be almost a character in the novel...it has to matter that the book takes place where and when it does.

Starting with Characters
At this stage of pre-writing, I populate the story with as many of the major characters (and any minor ones that I'm aware of as well) as is possible; thinking in terms of protagonist, antagonist, major, minor, dynamic, and static.  I also try to link/associate each character with someone (or multiple someones) that I know (or know about) 'in real-life'...not necessarily closely, and certainly not exactly, but it helps me to get a feel for the characters, and understand how they would react in the situations that arise in the book in a more convincing way.

Story Starters
For this final step of the first day (hopefully) of pre-writing, I think up five different scenarios introduce the cast of characters and/or set up the central conflict of the story.  I usually go into this stage having a clear idea of the start that I want to use, but work at coming up with four others as well, and find that it helps me think about the setting and characters in a different way, even if I end up going with my original plan.

I worked through these steps this morning, and was happy to find that the ideas came freely from whatever part of my brain the stories live in.  I've been thinking about this novel for a while, so I had some details and characters firmly in hand, but other needed a bit more coaxing.

This morning's work highlighted two bits of research that I have to take care of in the next week: an interview with a character analog and subject-matter expert, and a site-visit to reacquaint myself with the look and feel and smell and sound of Adirondack Great Camps.

I was most surprised to find that the story starter I had envisioned (and been happy with) months ago was not my favorite at the end of my pre-writing session.

The next session of pre-writing will involve a detailed analysis and biography and background of all of my characters, but before I can get to that I have an interview and a site-visit to take care of first.

This is helpful to me. I am going to try it. Thanks for sharing!