Choice and Choices Across the Worlds We Inhabit and Create

Lately, I’ve been thinking about choice, and choices, in the worlds I inhabit, and in those I create. The living and fictional beings that I live with are defined by their choices, or by the way they act and react to their perception of having choices.

To have agency, to be able to make choices and act on one’s own behalf, is not just freedom, it’s power. The power to pick your path through time, to dodge some obstacles, and intentionally run head-on into others, defines us as individuals; it’s what makes us real, even when we make the wrong choices, or are wrong about having choices at all.

The efforts to control or alter the ecosystem within which a being exists does more than keep them warm or fed or sheltered, these efforts communicate to the world the things that being wants, the things they fear, and their priorities among the wants and fears they have.

I began exploring this idea by thinking about the animals who live with me in my corner of the world. Dogs and tortoises and fish and shrimp; all of them living in artificial ecosystems that I control to a greater or lesser extent. As a body, their agency, their range of choices upon which they can act on their behalf, is limited, by design, by me. The interesting thing within the scope of this consideration is to explore and examine the choices that they can and do make, and to draw conclusions, and meaning, from those actions about who these animals are: what they want, what they fear, and what are their priorities. 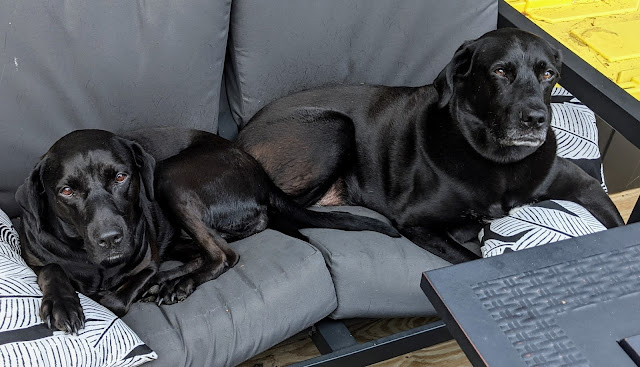 The dogs, Puck and Olive, are, at least nominally, holding up their end of a bargain that my ancestors made with their ancestors 50,000 years ago: a straight-up exchange of food (and some other minor considerations) for protection. Over those millennia, both sides have become conditioned to feel love for the other as a two-way reinforcement to the deal, the promise, we all made. I can feel the shape and solidity of our deal in the way that Puck climbs up into bed with me each night, spooning, but with his head facing away from mine, towards the door, in the direction an attack might come from. Olive’s approach to the compact is more complicated, especially with me, as in her previous life she seems to have been actively abused by men, and passively neglected in general; she accepts our offerings of food and seems to mostly trust me, but is not as invested in the protection aspects of the deal as is Puck. The differences in how similar dogs act and react under similar conditions give me a view into their inner lives. 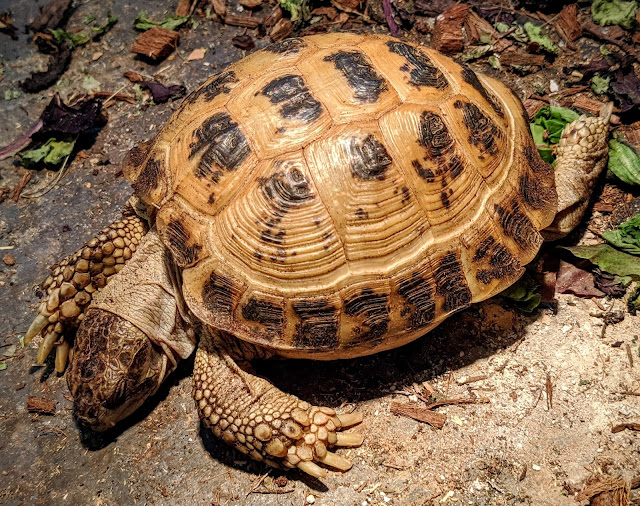 The tortoises I live with, in particular, an old Russian Tortoise, a rescue I call Chili (whose previous human had sadly named him Smirnoff), inspire thoughts about choice in a different light than is cast by the relationship I have, and have had, with dogs. Chili lived a small life in a small Tupperware container prior to coming to live with us in New Hampshire; despite moving into a bigger enclosure with better environmental conditions and food than he was used to in his previous life, he was grumpy and on a hunger strike for the first month and a half we lived together. Tortoises don’t like change, so he chose not to eat for six weeks, which didn’t hurt me, although it worried me plenty. After offering, and then throwing away perfectly good food for forty days and forty nights, one day, same food, he began to eat. Another aspect of his early days with me was hiding, burying himself; apparently, that’s a common tortoise thing when they’re young or scared or in new surroundings. After a few months, he grew sufficiently comfortable with my comings and goings and offerings and not eating him that he took to napping all over the place, wherever and whenever the mood took him. This suggests a trust that I won’t attack him in his sleep, but he still doesn’t like me. My other tortoises are curious about me, watching me while I write this essay, or following my movements around the office when caring for them or bringing food, and will come over for scratches on their heads or shells; Chili not only will not allow scratches, but if my hand stays in his enclosure and in one place for long enough, he’ll move in and bite me (I’ve tested it, with him and the others, he’s the sole biter among my five torts). The fact that he both trusts and dislikes me makes our troubled relationship interesting, and I will admit to spending extra time and effort trying to win him over (to date with a marked lack of success). 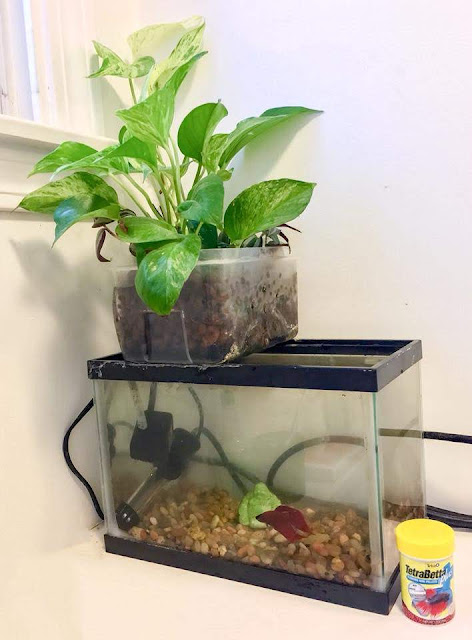 I’ve had a small aquaponic aquarium setup in the bathroom for years. I like the waterfall-esque noise it brings to the whole downstairs, love the applied science of filtering water through plants, and grow treats for one of my tortoises who enjoys nibbling pothos leaves (not Chili, although I’ve offered them to him). The fish, a betta, recognizes and can differentiate me from my wife or son, as evidenced by the fact that when I go into the bathroom he comes over to remind me to feed him (and he generally hides when my wife or son comes in). We don’t have much of a relationship beyond his desire for food from me, but that seems to be enough for both of us. It has occurred to me that if he learned to approach my wife and son with his friendly-seeming antics at the front of his little tank that he might get fed three times as often, but either he hasn’t figured that out yet, or he doesn’t want the extra food (alternately, maybe he tried it a few times, and they ignored him, so he saves his best swimming performances for me). 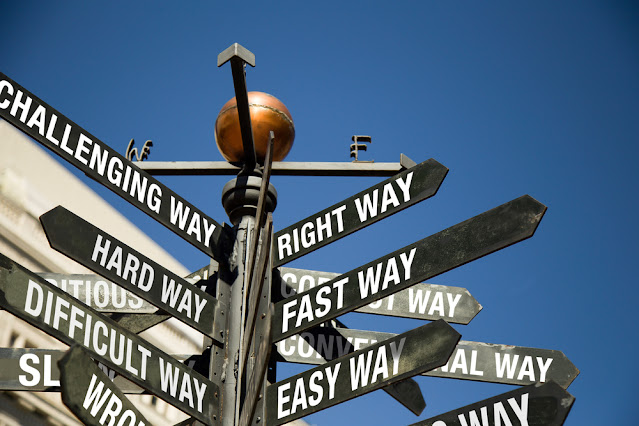 I’ve been working on a novel for a while, tinkering with the story and setting and characters, trying to get everything to feel right. A big part of it for me, with this novel, was in getting to know the various characters, in taking the time to write ‘field-trips’ for them (writing exercises in which they’d explore their world a bit under my watchful, but hopefully detached, observation) to see how they’d act and react in the fictional setting I’d built for them; to get a feel for them and for the choices they’d make. After running them through myriad different scenarios, I felt as though I was getting to know them, and was able to get back to the story I’d been trying to tell previously. It was interesting to me how their choices were such a large part of who they are. 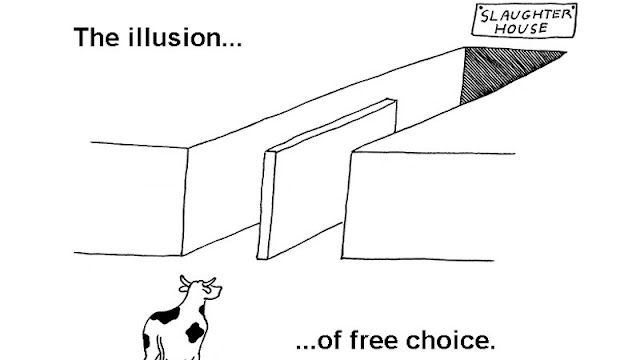 Sometimes my subjects of study, organic and written, can help me understand them even when their choices are phony, or when any choice leads to the same outcome. Puck comes into my office to sleep at my feet when I’m writing, I think he sees it as his job to help. Olive sometimes pees inside, even when the door to their fenced run is open, I think it’s because she doesn’t want to get her feet cold or wet. They both get fed twice a day regardless of their being spectacularly or poorly behaved on any given day; this may make those choices particularly their own, particularly demonstrative of who they are. Choices made when those choices are without consequence present an interesting look into the makeup of any real or imagined being.

I find myself observing people in the supermarket, in books I read, on TV shows I’m watching, and giving them “choice-test”, seeing if I can figure out what choices they’re making, why they’re making them, and what it says about them and their priorities; it also makes me wonder about one of the nuggets of wisdom that a character in a favorite movie once dropped.

Posted by Jamie Sheffield at 11:41 AM No comments: