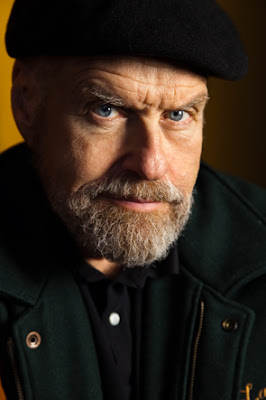 Lawrence Block is America’s preeminent crime writer, and the author of more than 50 novels, 100 short stories, and numerous books on writing. In 1994 he was named a Grand Master by the Mystery Writers of America; he was awarded the Gumshoe Lifetime Achievement Award in 2005. On top of all that, he’s both my favorite author, and an inspiration to countless wrters (myself included); I was recently lucky enough to have him agree to an interview (which you'll find a few inches further down).

I first encountered Mr. Block's writing when I stumbled onto the eighth book in his Matt Scudder series, A Ticket to the Boneyard. I fell in love … with the pitch-perfect dialogue, taut and suspenseful storyline, stark and sometimes shocking brutality, and with the moral ambiguity of the intriguing cast of characters (no pure white or black hats among them, everyone brings their own wonderful shade of grey to the story). As soon as messieurs Scudder and Block and myself finished with Leo Motley (the story's ill-fated antagonist), I quickly found the first book in the series (The Sins of the Father, if you were wondering) and kept reading until I had caught up.

Once I was current with the Scudder series, I worked my way through his other famous series (Bernie Rhodenbarr, who I will always think of as 'Bernie the Burglar', and 'Evan Tanner the world’s most unusual spy') before exploring his other great novels (like Such Men are Dangerous, one of my all -time favorites) and his short stories (like the fantastic collections, Defender of the Innocent and Some Days You Get the Bear). I’ve never failed to enjoy any single one of his books, and his writing seems to only get better as time goes by.

A perfect example of this is his recently released novel, The Girl with the Deep Blue Eyes, a fast-paced, sex-filled, and nasty piece of noir that’s as good or better than anything Block’s written, in my opinion. I bought/downloaded it the day it came out, and read my way through it more quickly than I wanted to … trying to stretch and savor the experience, but unable to delay the pleasure of reading one more page/chapter of retired cop, turned detective, Doak Miller’s violent romp through the steamy days and nights in Gallatin County, Florida. 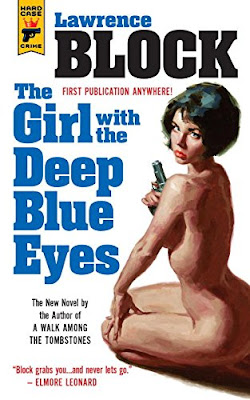 The confidence and competence with which Lawrence Block steamrolled through this story called to mind both John MacDonald (at least partly because of the story being set in Florida) and Elmore Leonard (for the depth of characters and great dialogue), but with that special flair and edge that only Block can bring to his version of adult storytime; it would be fair to say that The Girl with the Deep Blue Eyes is a prime example of Lawrence Block writing exactly the kind of story and characters he loves best, while at the full height of his powers.

At any rate, enough prelims, here are the questions and answers from my interview with Lawrence Block:

1. What are you working on at present?

An updated and expanded edition of Writing the Novel from Plot to Print, my first book for writers and continuously in print since 1978. It's stood the test of time, but the word has changed in the past 37 years, and certain areas — ebooks, self-publishing — are unrecognizably different. I should have the new edition on sale in early 2016, probably with the title Writing the Novel from Plot to Print to Pixel.

2. How do you deal with writer's block?

At my age, I'm apt to yield to it. But my friend Jerrold Mundis has a short book that's truly the last word on the subject. It's called Break Writer's Block Now, and I recommend it without hesitation.

3. Do you have a favorite work that you feel has been overlooked?

The nature of the business is such that non-series novels never get the attention of books in series. I'm delighted my books about Matthew Scudder and Bernie Rhodenbarr and Keller and Tanner are as popular as they are, but regret that Random Walk and Small Town get less attention. My newest book, The Girl with the Deep Blue Eyes, is getting plenty of attention right now, and several reviewers have been kind enough to call it my masterpiece. But it's not part of a series, and its popularity will probably prove less durable in years to come.

4. If you could have lunch with any three writers, living or dead...

Ah yes, that popular favorite, and easy for me to answer. I'd pick Ross Thomas, Evan Hunter, and Donald E. Westlake. I already know what excellent company they are. And I miss them. If you'll set two more places, I'd add John B. Keane and Dave Van Ronk.

5. Do you feel you've inspired other writers?

Oh, I know I have. All over the world, no end of readers have hurled books of mine across the room. "I know I can write a better book than this piece of crap!" they've thundered. And wouldn't you know it? Time after time, they've been right.


Personal note: While I've never hurled one of your books, or thought them crap, I have been inspired, by a continuous exposure to your great ideas and characters and plot twists, to try my hand at writing ... it's safe to say that without your books, I wouldn't have written/published my books.

I’m deeply grateful to Mr. Block for taking the time to answer my questions, and even more grateful to him for the superb writing he’s done for me and all of his fans over the years. His writing, and books about writing have been an ongoing inspiration to readers and writers over the year, myself included. I look forward to reading more great books from him in the coming years, especially the updated and expanded Writing the Novel from Plot to Print to Pixel.

You can find Lawrence Block’s work and words in your local bookstore and online. I’ve provided links to buy some of the works mentioned up in the blog/interview above, as well as few of other relevant links below:

Jamie
Posted by Jamie Sheffield at 12:31 PM No comments:

I'll be the first to admit that the biggest reason for this blog update is that I love the loop of Kermit typing ... but even beyond that, I do have some important stuff to share!


Enjoy your Sunday, read and write!

Jamie
Posted by Jamie Sheffield at 6:48 AM No comments: