19 days into my fourth Camp NaNoWriMo! 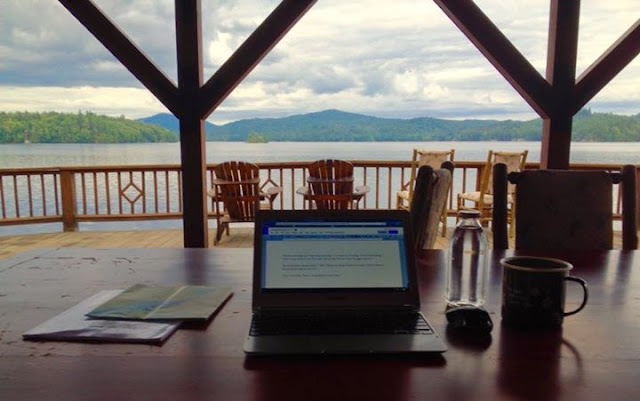 This is the fourth time I've written a novel in the summertime using the NaNoWriMo method, which basically involves a month-long writing sprint to produce a rough draft.

This method has worked well for me because of my teaching schedule during the school-year; it allows me produce a rough draft when I have the time to devote hours a day to writing, and then to work for the rest of the year with beta-readers and editors to put the rough draft into shape, and get it ready for publication. 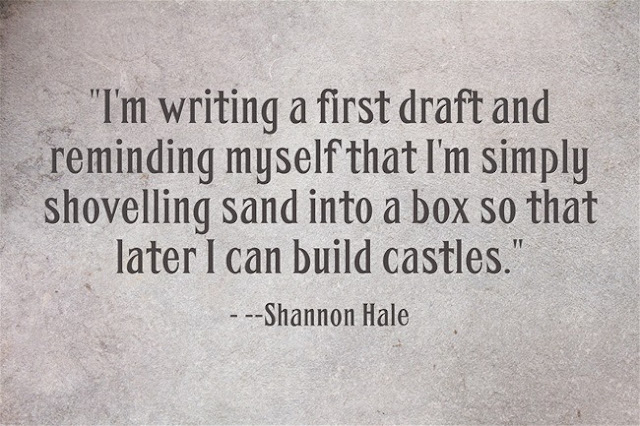 I've done some of the writing at home, working at my standing desk in the living room, with the dogs watching me, but most days I've been heading to Origin Coffee, a new coffee shop in nearby Saranac Lake, and working from when they open until midday. 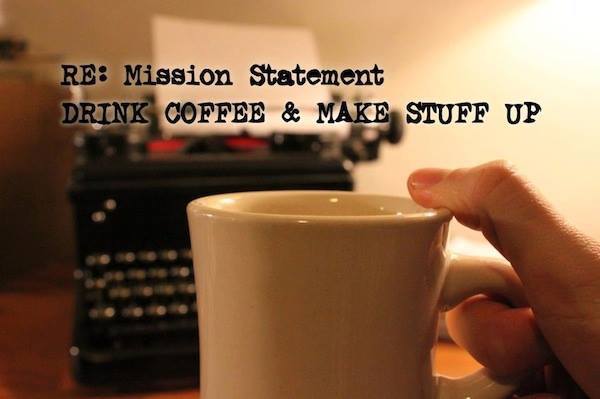 This week, though, I've been lucky enough to have my parents up visiting, and been able to work a few mornings up on the roof of the boathouse of the camp they've been renting. It's a lovely spot to write about the Adirondacks from .... 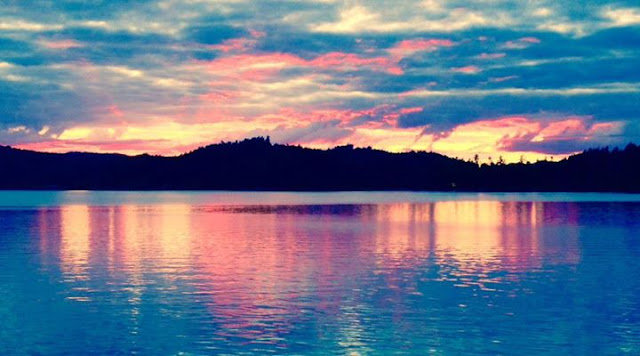 I spend my mornings watching the morning light hit the far shore, mist rising from the lake, and herons flying by. 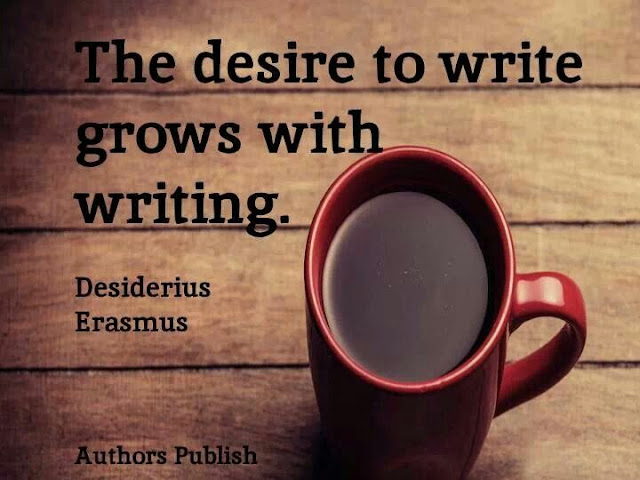 I've found that I have an easier time each year meeting my writing goals during my month-long sprints. My first year I aimed for 1600 words per day, and often struggled to make it. This year, I've been averaging 3800 words each day of writing (and unlike in years past, I gave myself permission to miss the first few days of the month and the occasional day along the way). 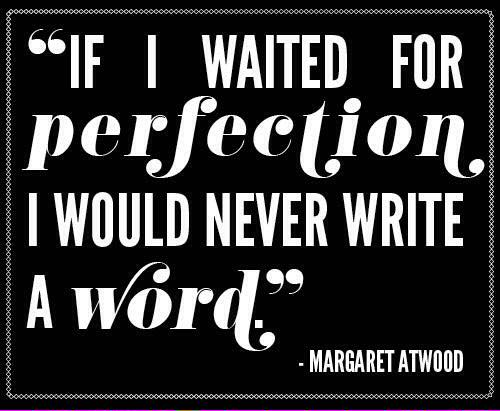 I can feel the story coming together more effectively/efficiently in my head, and on the laptop screen, at least somewhat because I have gotten comfortable with the idea that the rough draft I put together during the sprint is not remotely a finished product. 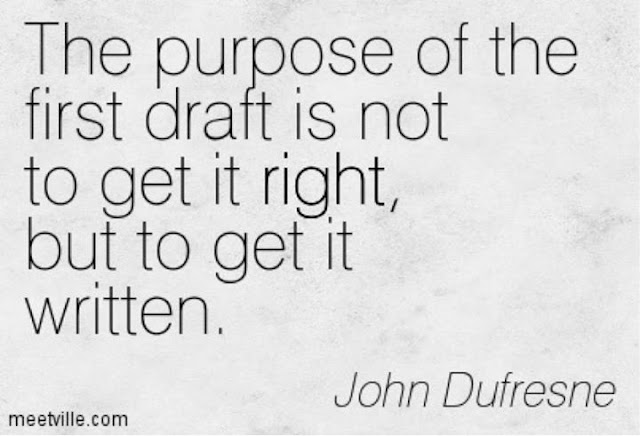 Getting the bones of the story down and out of your head makes it possible to work with beta-readers and editors of various sorts, which will in turn allow you to bring the story from where it is in the rough draft to where you would like it as a rough draft.

I drink a lot of coffee during my writing sprints, and not just to stay awake in the face of long days. I find that being in a stimulated state helps me access my creative side in a way that I have trouble doing without the extra caffeine in my life ... the first week after the month-long coffee-immersion is a little tough, but my body and mind soon adjust to the change. 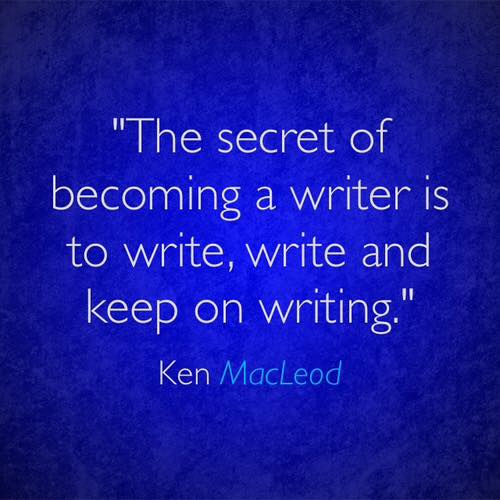 I'm a big believer in the idea that the simple act of writing is the single biggest factor in improving both one's ability to produce words on the page, and to craft/create meaning (and stories) from these words ... I'm nearing a million words written in the pursuit of my writing in the last four years, and would recommend writing over workshops and classes every day of the week. 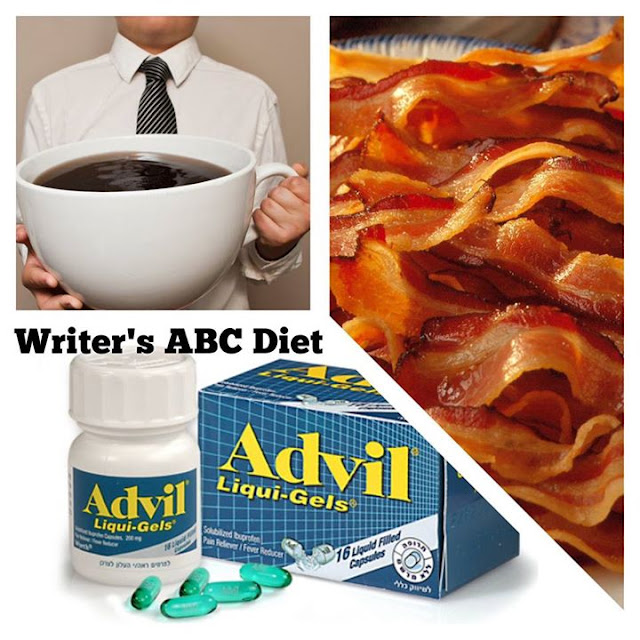 I estimate that I have about 15000 to 20000 words left before the rough draft of this summer's story is completed, then I'll put it aside for a few weeks before taking a peek at what I wrote. If I have the time, I try to bang off some of the rough edges before I pass it along to my first reader.

After my writing sprint is done, I generally find myself sore and tired and head-achy from so many hours in the same position (my teaching day/job is mostly spent walking and talking, not sitting and typing). I also find that I feel yucky from not eating as well, and getting much less exercise during the month, but I'm looking forward to re-starting my running regimen and trying to drop some weight this fall.

Thanks, and wish me luck in the rest of the writing sprint!

I've been thinking about writing my next novel, since I finished principal work on the last one. 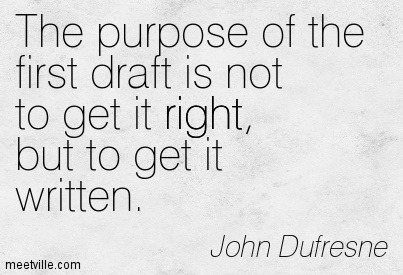 I knew the basic shape of the story, and what I wanted to say with the story, but hadn't really started doing much actual work on it until this Spring.

I use a workbook I made with CreateSpace a few years ago to help me planning my writing ... story arc, characters, setting, sub-plots, etc.

I wrote a short scene one morning at the end of June, just to get a feel for the antagonist, reasonably sure I'd dump the vignette once I really got going on the story in the deep summer.

My July was busy and scattered and great, but not ideal for writing, so I waited until we all got back from the exotic places we'd been, settled back into life in Lake Clear, did some laundry, and had a bit of space to do some serious writing.

Starting August 4, I was able to spend 4 hours each morning at Origin, a local coffee shop, writing like a highly caffeinated madman ... I'm out to (or up to, depending on your perspective) 17,000 words as of this morning, and the words are flowing well (better than I had hoped, really).

I'm not sure if it's the summer, or my having written three previous novels, or the coffee, but the writing is going well, so I have no desire to jinx anything ... I'll keep doing everything I've been doing for as long as I can. 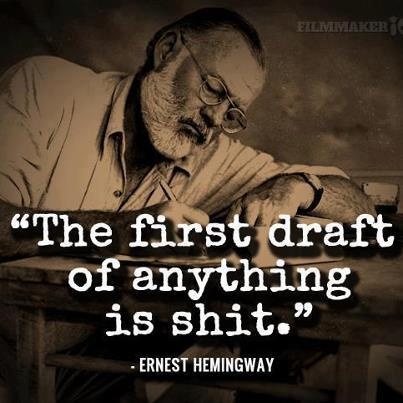 I don't know that what I'm writing is good, it's probably not ... but I'm enjoying the way the story is coming out, and am confident that with the generous/forgiving/expert help of the readers I use, I'll be able to fix things by the time we've struggled through a couple of drafts.

What I do know is that my life is different, and better, now that I'm a writer ... I'M A WRITER!

For those interested in the numbers, Here Be Monsters was about 80k words, Caretakers was close to 100k, and Between the Carries was around 90k ... Thunderstruck feels as though it'll come in between 90k and 100k

I just wanted to check in and give a quick update to people who read/follow my books and work and life ... thanks, and keep reading!

Jamie
Posted by Jamie Sheffield at 8:40 AM No comments: