MFA, Short Story Collection, and what I'm working on this morning ....

Those are all excellent questions, especially the first two, and rather than Sir Edmund Hillary-ing my answer, let me try to think my way through them in this blog entry ... if you promise to read it, I promise to write it thoughtfully.

I went back to school (yet again, some might say) to get my MFA in Creative Writing at Goddard College because I felt that I was more a storyteller than a writer. This may seem sophistry or pretense, and perhaps it is (I've been accused, and guilty, of far worse), but nevertheless that was the fulcrum I needed to get myself back in the classroom (on the student side of the lectern, at least initially). Over the course of the MFA program I think I've stretched and grown as a writer ... trying new things as well as getting better at things I was already doing.

I felt confident in the structure and process of the four Tyler Cunningham novels, and had concerns that while I could likely produce another novel, it wouldn't stretch me in the ways I wanted to be stretched in an MFA program. A novel is one example of a thing, one chance to practice new strategies, one opportunity for growth; I wanted dozens. To that end, I wrote a gazillion (nearer to 100 actually) short stories; two dozen (ish) of which will be in the collection that is my thesis project: "No man is an island ... except me, I'm definitely an island".

Having the luxury to write, and subsequently select from, a large number of short stories, I was able to pick both my favorites, and further, from among those was able to pick a sampling that all seem to row in the same direction when taken as a whole. The stories (including the title piece) are all about people both outside of human society and aware of that outsideness, and (I hope) explore the condition from a new, or at least interesting, perspective.

Last week, upon my return from my final residency at Goddard, I took the time to make a final  selection of the stories that will be in the collection ... final-ish, it may be that after my advisor and second reader take a look at the collection, they suggest I drop or pickup a story or two. 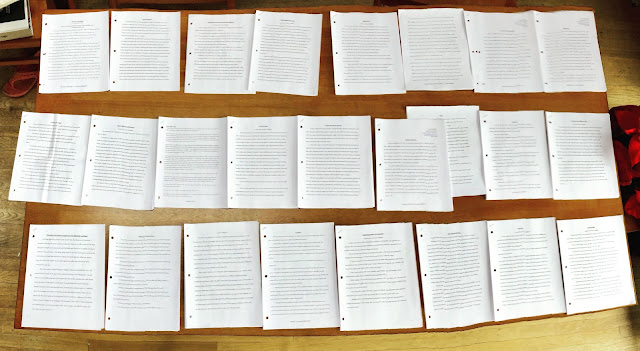 I printed out all of the contenders, reread them so as to climb back into the various worlds presented, and then tried to establish a reasonable order in which to offer the stories. some of the strongest works at the beginning to grab readers, an undulation of pacing and type and mood throughout, and another of my favorites with which to end the collection. Three of the stories have been published in literary journals (so far, I have hopes for a couple more being grabbed, including two submissions to The New Yorker ... why not dream big?), something I had previously thought was verboten, but have learned actually makes the collection more attractive to potential publishers.

My plan for the rest of the semester, including this morning once I've finished this blog entry, is to polish the stories and the collection within which they float. In a few weeks I'll send it to my advisor and second reader for their thoughts and guidance. I have some administrivia and paperwork to do for Goddard in the assumption that I'll be graduating in July. Once I hear back from my advisor and second reader (and any other wise eyes I ask for help with the collection), I'll spend the intervening time trying to deal with bumps in the road that is my collection. I'm a big believer (now) that editing and revisions are never done, just due.

Although I'm mostly focused on the completion of my thesis and MFA, I am looking beyond Goddard and this collection of shorts to what's next. I've got two thirds of a very rough draft of my fantasy novel, Oasis, written, and that's calling to me. Readers of the Tyler Cunningham series have been (mostly) patiently waiting for three years for the next installment; I have a couple of stories waiting to come out, possibly novellas, possibly interwoven as a novel. I've also gotten to know a new detective duo who have set up shop in the back of my head, providing an amusing distraction when I'm stuck on other projects; they have a lot to offer, and feel as though they'd be great fun to work with, so I'm tempted to open with them. A (the?) cherry on top of future projects is a cookbook that's not a cookbook, something more along the lines of a lifestyle and gadget and gift guidebook for the kitchen adventurer; I've never done non-fiction writing, never worked with graphics in a book, never formalized/organized my explorations in the kitchen beyond fun and a love of food and drink.

It should make me nervous or scared, but really I'm just excited ... I hope you'll come along with me on the next steps, and the ones after that ... I'm really looking forward to sharing these stories, and the next ones, whatever they are, with you.

Jamie
Posted by Jamie Sheffield at 7:49 AM