I just got back from two weeks in Iceland with my wife and son. We had a spectacular time exploring the fascinating island-nation. It occurred to me on landing back at Logan at sunset the other night, driving home in the dark through legions of Masshole drivers, that we'd been living in the light for two weeks. 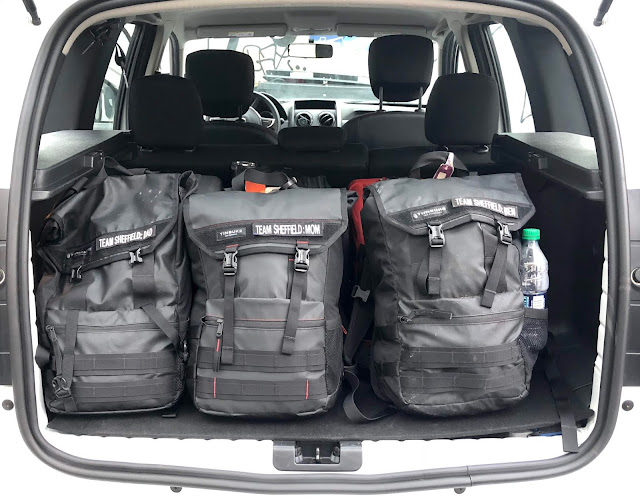 Although the sun technically sets for an hour or two out of every 24 at this time of year, the sky never gets darker than a cloudy afternoon. We'd flown in, rented a car, and spent the last two weeks driving Route 1, also called the Ring Route, which circles Iceland. 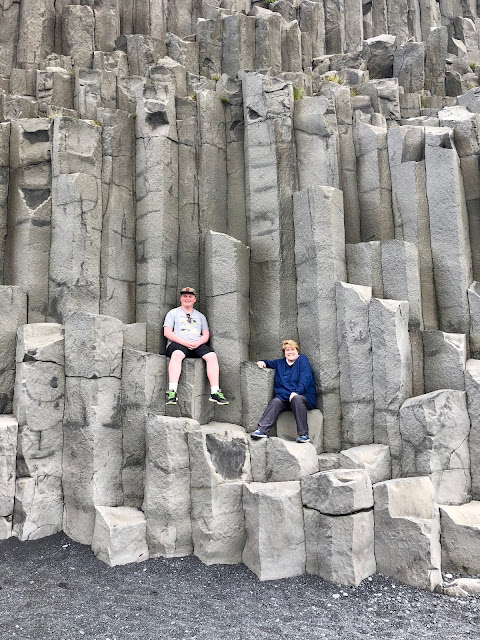 Iceland is huge, and although summer is the crowded season, we more often than not found ourselves alone in the spectacular countryside, which has been shaped by fire and ice over the last few million years. 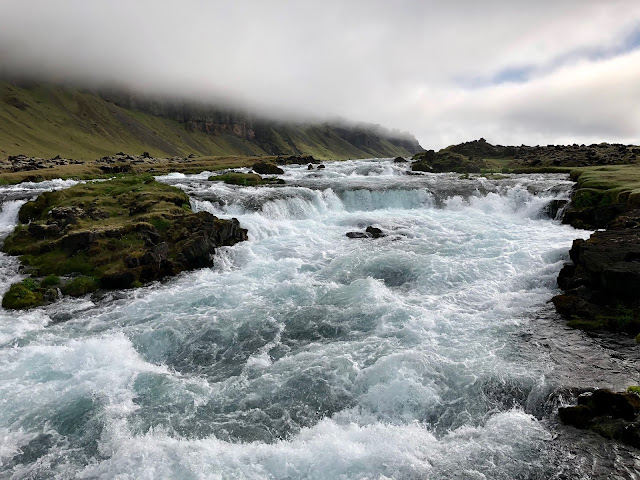 The natural world feels fierce to one experiencing it through Iceland ... all sharp edges and roaring water, walls of ice and untenable heat. 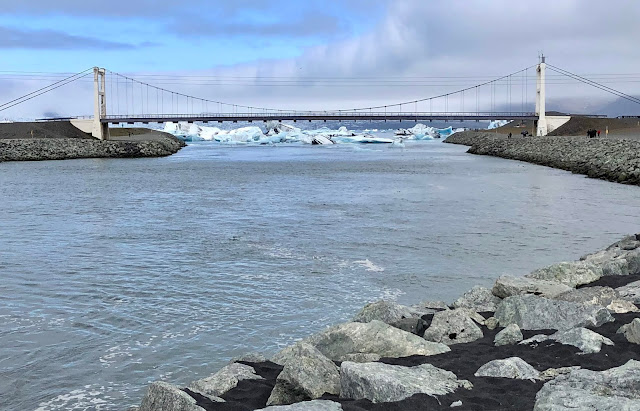 The things of man skirt or drape the powerful forces that shaped, and are still shaping, the world we wandered through, a feeling of man's impermanence being one of the big takeaways from our time out on walkabout (driveabout). 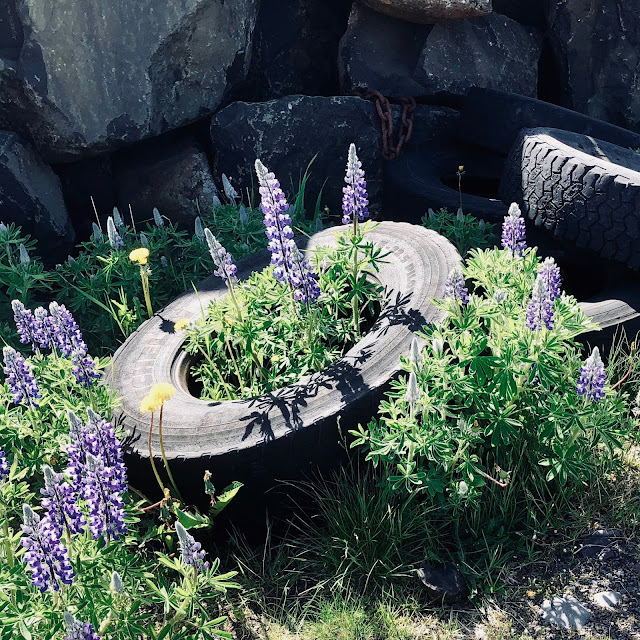 Things not tended by the people living there will be swallowed up quickly. 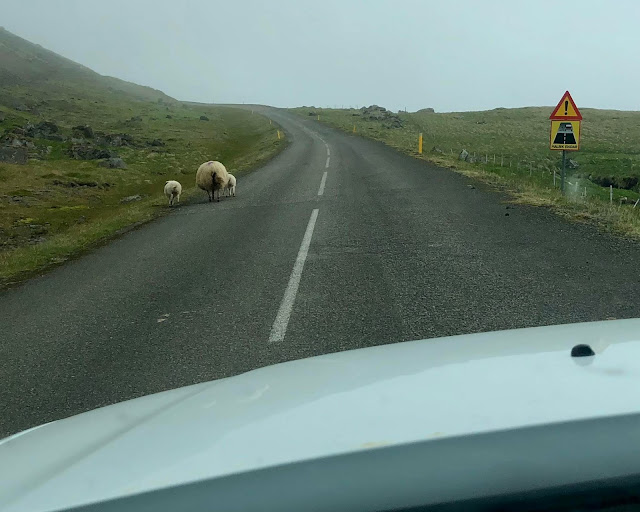 Route 1 is at its best a two-laner, but most of the time is dominated by wild sheep, unpaved sections, blind hills/turns, and one lane tunnels and bridges ... at most any time, you can stop in the middle of the road for a picture or pee-break, and not worry about traffic from either direction for minutes (or hours).

Glaciers and rivers work tirelessly to cut through layers of volcanic rock and hexagonal crystals deposited by volcanoes over the millennia.

Although smaller in size than New York State, Iceland varies from day to day (sometimes mile to mile) as you wander along the roads men have scratched upon her surface. It would take a truly jaded soul not to be amazed a hundred times each day while exploring.

There's something about the power of the forces at work on the land, the roaring and the absolute quiet, the baking heat that comes from the ground through the soles of your shoes in places along with the chill wind that rushes down from glaciers above at all hours ... it inspires, pushing and pulling at your brain, prompting a new contemplation of your relationship with the world you live upon.

This cave gave us shelter from a cold morning, steam from the geothermally-heated water pouring in from a thousand fissures in the floor and walls forcing balance with the sleet the skies were hurling at us. 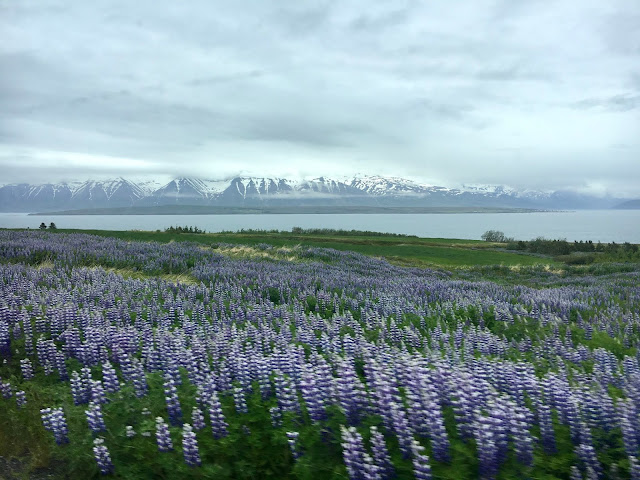 The fjords and mountains fields of lupine (a stranger, introduced and since run rampant across the countryside) threaten constantly to overwhelm the senses ... I had ideas for new stories, and for reworking stories I've already written, a dozen, a hundred, times a day, but most of them were chased away by the onslaught before I could catch and write them down. 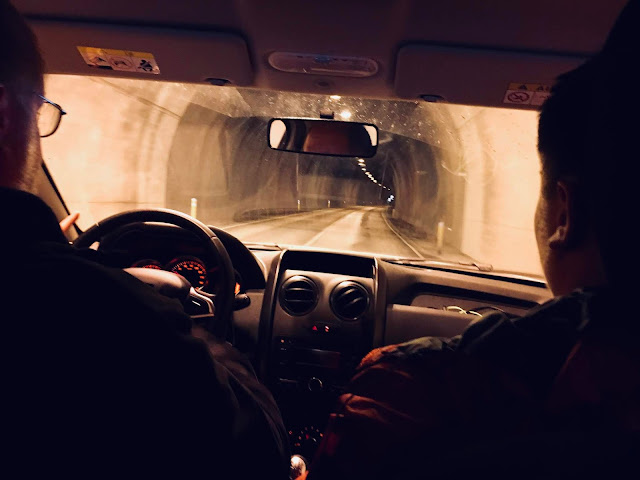 The two-way, one-lane tunnels (and bridges, to a lesser extent for reasons I don't fully understand) forced a focus I generally tried to avoid while experiencing Iceland ... in the minutes I was involved with negotiating these I had no time or space in my head for anything but muscle-memory driving and paying attention to visual stimuli.

It was bracing, if scary, but in a good way (after the fact). 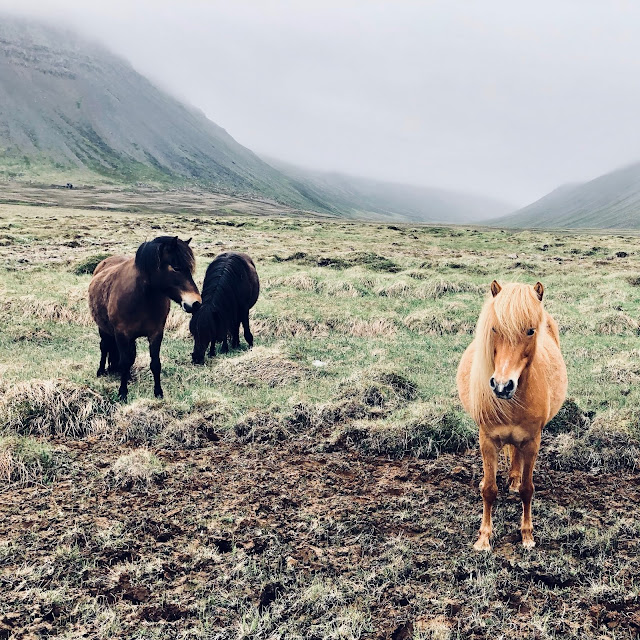 Every Icelandic horse with blond hair reminds me of Jon Bon Jovi, and I spent parts of each day humming "Living on a Prayer". 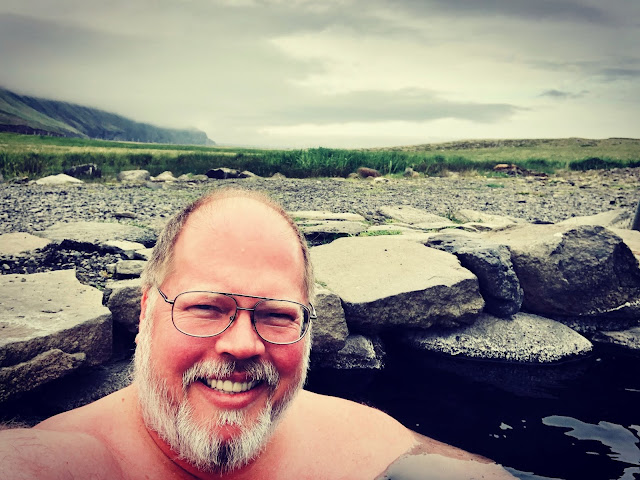 Thanks to the superabundance of both geothermal energy and water in Iceland, every town has a sundlaug, or public pool, and we stopped off to revel in most of them.

The rigidly enforced policy/practice of showering to clean before getting in the pools is at first nervous-making to body-shy Americans (or at least it was to me, especially when changing and bathing in front of young children of both sexes), but after a time it just is ... the precursor to a relaxing and enervating ritual that I came to love, and have been missing since we got home.

The picture above is of Grettislaug, a hot pot out in the wild, at the end of a rugged peninsula pointing at the Arctic ... this pool, unlike the tame ones in towns and villages across Iceland, had a healthy colony of algae growing on the bottom and a few spots in the floor where superheated water that would have raised blisters in a few seconds if not avoided kept it full, and me warm on a cold and breezy day by the Greenland Sea.

The churches, and spirituality, of Iceland and Icelanders never ceased to inspire. In places where there didn't seem to be enough people to fill a phonebooth you could always find a church in a place/position that made it clear the natural world was a part of the belief system. There was also ample evidence of a deep, millennia-old, faith in the existence of elfs, fairies, and witches.

As the sky was always light, and the summer was reputed to be the high season, we generally started and ended our days early, adjusting our clocks so that we'd be out of sync with crowds that never really materialized.

I found it bizarre to be so wedded to my watch for a sense of time during the weeks we spent in Iceland ... I have spent much of my life satisfied with looking at the sky, and knowing within a few hours what time of day it was, there was no way to do that on this trip, and I became a slave to my watch's version of time, even though I generally had nowhere to be, nothing to do, besides be. 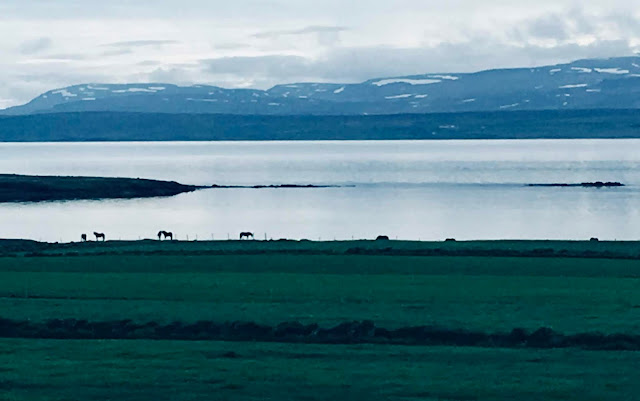 Circumnavigating Iceland gave me a host of new ideas, new moods, new colors with which to paint my stories ... although we've been back a few days now, I can still feel it all soaking in, things finding their final form, or shape, in the parts of my brain where I store memories.

The vastness still defies imagination, the hours we spent alone on the road, or in the mountains, sheep and wind for allies, seem something made up, a dream. 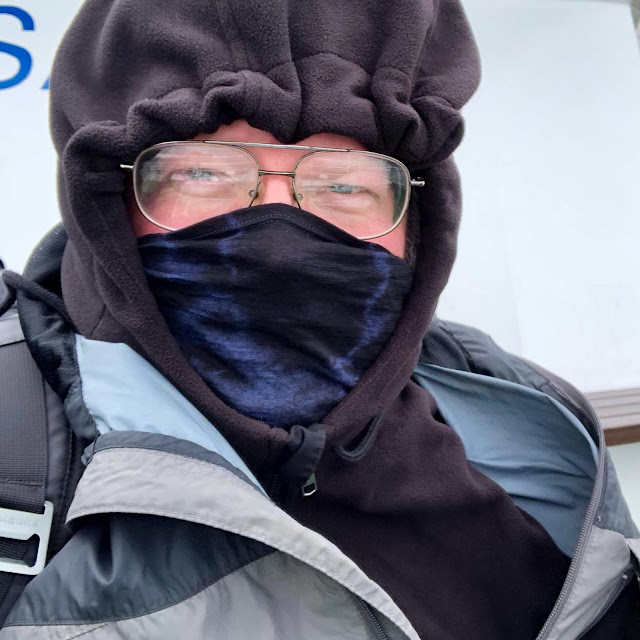 Nobody is the same from one day to another, but I genuinely feel that my life and brains and soul and path going forward have been irrevocably altered by the counter-clockwise path I followed around the rim of this amazing country for 14 days. 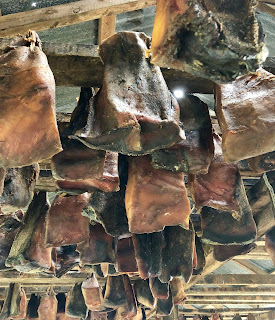 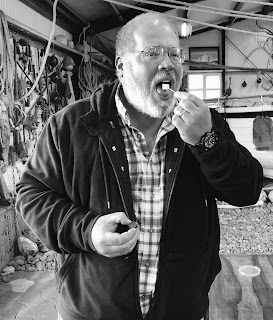 Hákarl keeps bouncing around in my brain ... it's fermented/putrefied Greenland Shark t5hat captures something of the essence of Iceland for me.

Hard winters make for hard choices. Icelanders knew that eating Greenland Sharks made them sick (or killed them if they ate enough), but starving was also a bad option. Some brave soul discovered that shark they'd buried for a few months had benefited from the degradation of the overwhelming amounts of urea in the flesh into ammonia that would mostly evaporate if they left the exhumed shark hanging in the wind for a few additional months.

More than any other nasty food of which necessity is the mother, Hákarl had always fascinated me, so I made a point of stopping at the museum celebrating the "food", which also happens to be the nation's top producer of the stuff ... we all tried some, and although it's not going to replace steak or nachos in my diet, I could manage it if I had to in order to survive.

The thing that grabbed me is that these vikings who'd left their homes in Europe behind, to settle this rough and brutal island far to the north, found a way to push back at lack and starvation and death ... to shout no in the face of literal darkness (as in the summer it never truly gets dark, so in the winter it never truly gets light in Iceland).

Something in me changed when I learned about, and tasted, Hákarl. 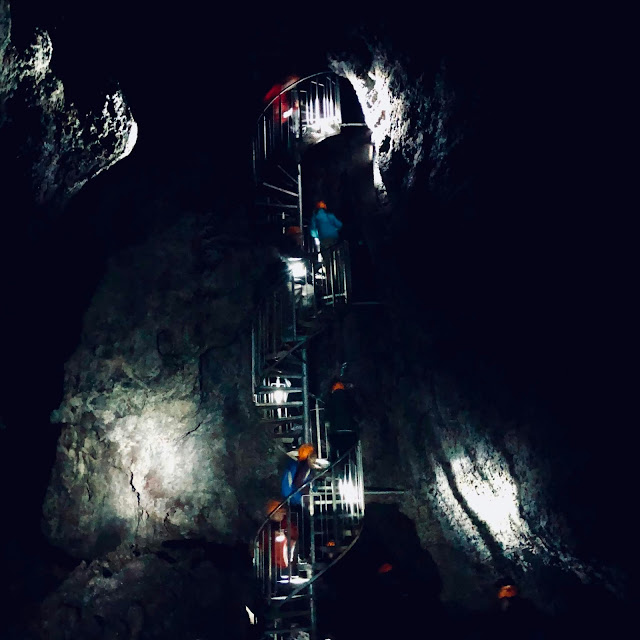 We explored the inside of a volcanic tube, venturing more than hundred feet, through cavern after cavern down and away from the light and warmth up above. When we had reached the deepest point of our journey, the guide with us asked everyone to turn off their lights and stand quietly in absolute darkness ... the first we'd seen since arriving, maybe ever.

It was interesting to hear the drips of water filtered through a thousand cracks in the volcanic rock all around us, to feel the coldness pulling at the edges of our clothes in search of warmth to steal, to feel the dark, a solid and powerful thing, pushing at my eyeballs ... it looked the same in any direction, with eyelids open or closed, with fingers in front of or pushing at my eyeballs.

It was an unnerving experience, more so given we'd been living in perpetual light for weeks, and we all rose back into the world of the light and the living different than we'd been an hour earlier. 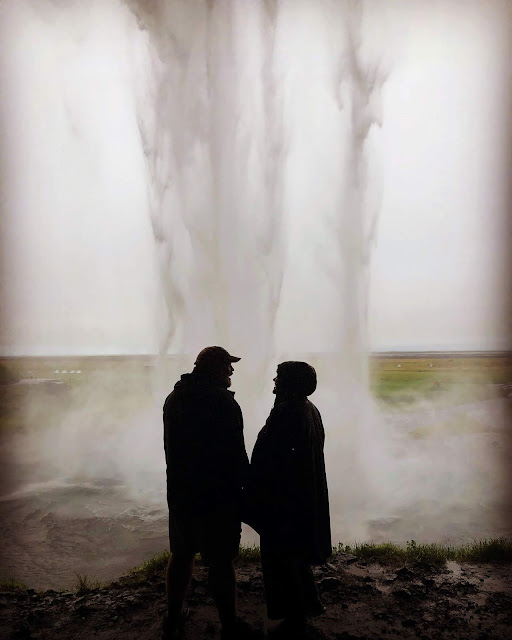 I'm interested to see what the new Jamie is, the Jamie who went behind this waterfall with his love, and came out the other side ... who saw the sun set on June 4th, and then not again until the 18th, who explored the fire and the ice, who was scraped and polished by wind and sand.

I feel as though I stepped off the world for a couple of weeks, and returned a radically changed man.

My writing will be, must be, altered by the changes, the miles, the nightless nights ... I'm eager to meet the new me, and to share him with the new world I've rejoined.

wow, jamie. that is awesome in the classic sense.