Living on a Barge in Paris 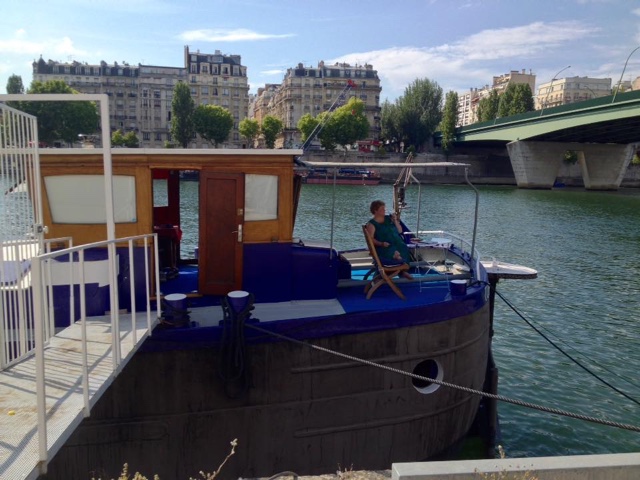 We came here with no expectations about what our life in Paris would be like. 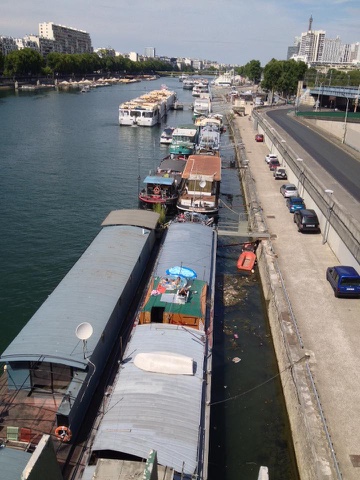 A week, more or less, living on a small barge on the Seine, downriver from most of what most people come to Paris for .... 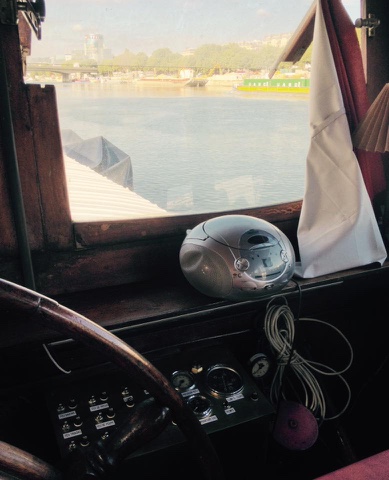 Other barges and ships motor by day and night, and the good ship "Tortilla Flat" rocks gently in their wake. 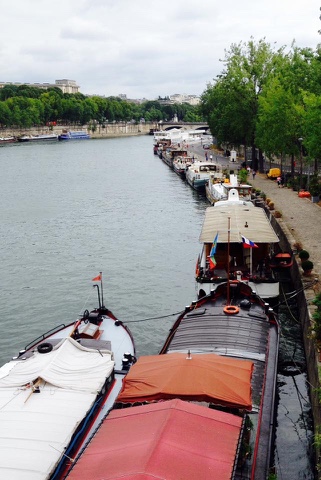 Giant fish leap and splash by the side of the boat at all hours ... I think they're catfish, but Gail read an article that mentioned large specimens of the pacu, a introduced relative of the piranha, have been pulled from the waters of the Seine by fishermen (she likes her option better, and since we're not going swimming, what does it matter?). 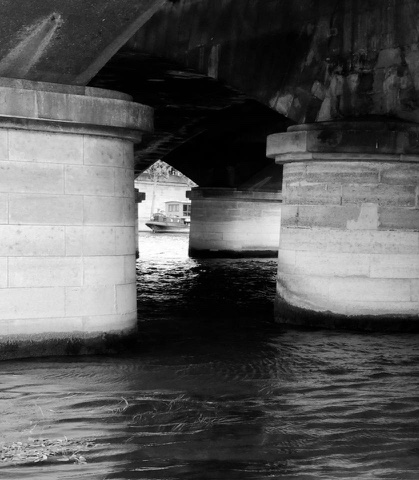 We found on our first night here that it stays light until after 10pm, so we tend to stay up later here then we would in Lake Clear (one of the other places we live). 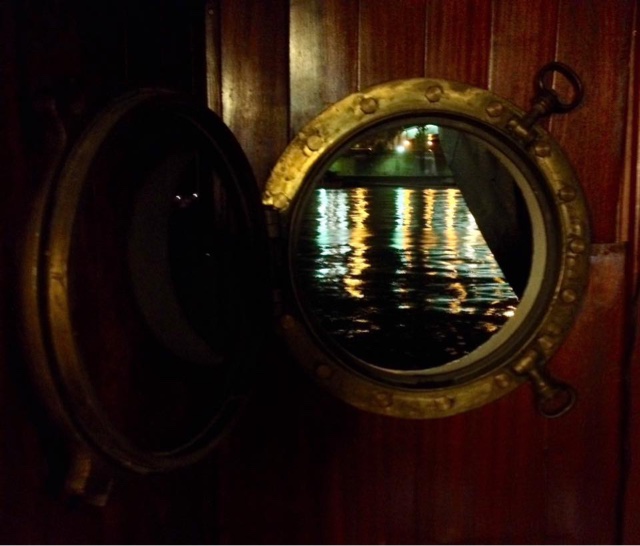 The evenings are so pleasant after the bright and hot day that we stretch ourselves, staying up into the early hours, listening to music and watching boats and people and drinking too much cheap wine and watching Paris-themed movies I brought along on my iPad and listening to the piranha jump and (presumably) gnash in the water by the boat. 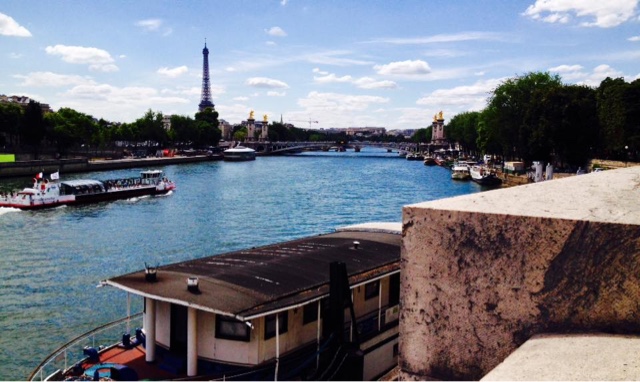 I've found that while living on the barge, and in Paris, I often don't wear my watch or know what time (or often, what day) it is ... this is generally a good thing. I sleep until I wake up in the morning, make coffee and enjoy it, along with bread from the day before on deck with whatever book I'm reading at the moment. 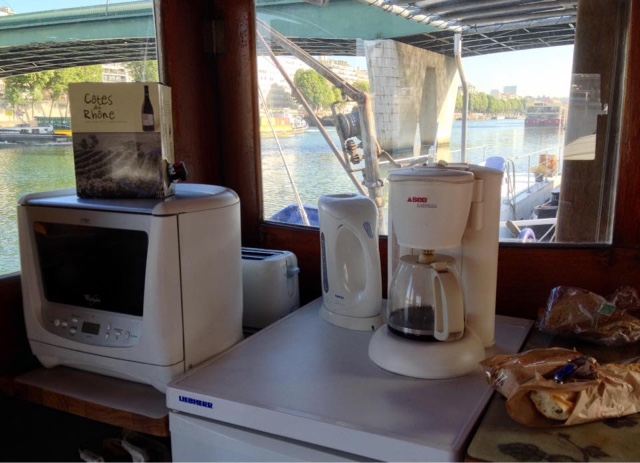 Gail and I like to think of ourselves as travellers rather than tourists, a small, but pretentious, difference ... for me the nuance lies in a focus on the journey more than the destination. 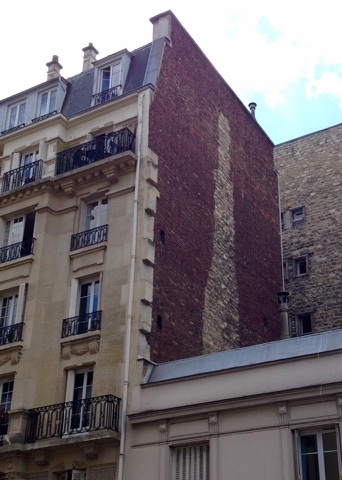 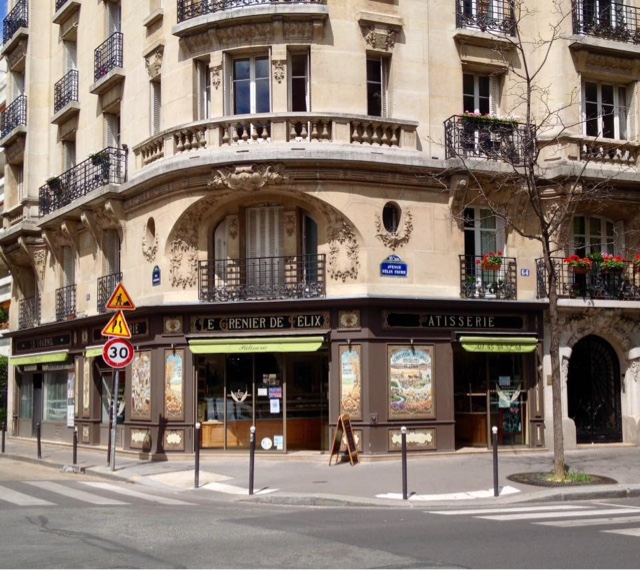 We've been eating lots of meals on the barge, breakfasts every day, and then generally one or the other of the main meals (only an amateur limits themselves to three meals when in Paris ... we tend to eat five times a day, and drink, to hydrate or dehydrate, whenever we're awake). 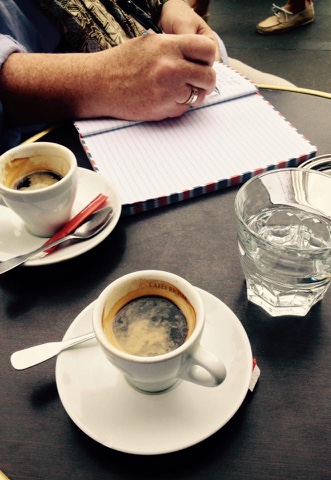 We get bread everyday during our wanderings, produce when something takes our fancy, and cheese or charcuterie when seduced by it (the produce is beautiful, the cheeses and charcuterie are sexy/sexual ... true story). 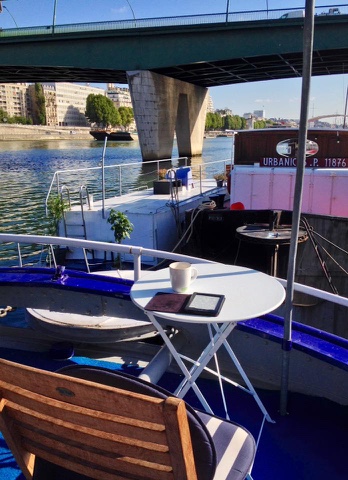 {Ostentatiously Long Sentence Alert, OLSA}
We've been to the great museums, Notre Dame, the Eiffel Tower, and will be heading down into the Catacombs, but our lasting memories of Paris will be of the tiny and quiet and empty and ancient streets, old and beautiful buildings, friendly cafe owners tolerating my horrific French while we soak up Orangina and Vin Ordinaire and the sights and sounds of the backstreets, getting lost and found and lost again exploring the pocket-parks scattered all over this ancient city, and the hours Gail and I spend everyday sitting on the deck of the barge, enjoying the feel of the world passing by around us, and our own company.
{I warned you} 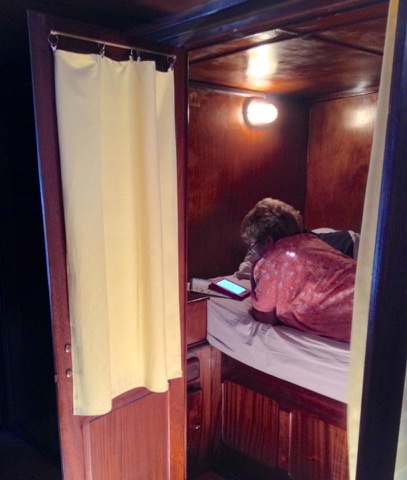 Gail's taking a mid-morning nap downstairs in the cabin while I've been writing this, but I think I can hear the old teak groaning under foot as she contemplates a second start on the day (the first start only lasted long enough for coffee and a chocolate croissant) ... we're going to explore the 15th Arrondissement for a few hours with a nominal goal of finding a cafe/brasserie and some parks we'd read about prior to flying over. 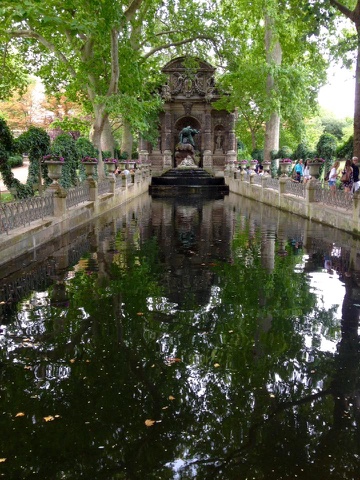 Someday this trip's going to end. You can't live on a barge on the Seine forever, or at least we can't. 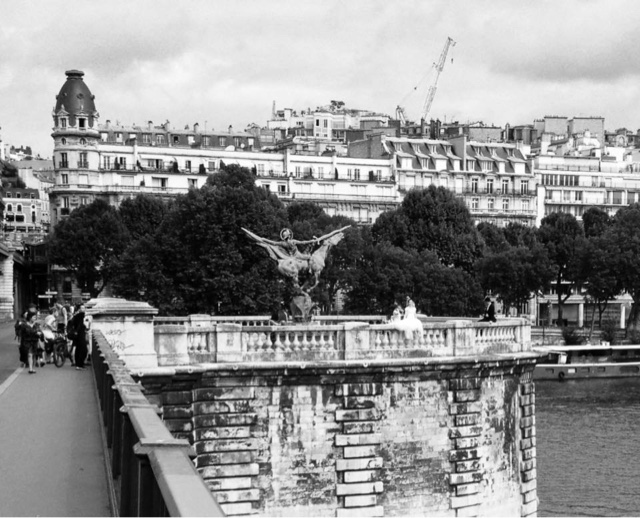 I can feel my other life, the one on land, in a house in the woods, calling me ... but we've got a couple of days left, some more exploring and tasting and sitting and drinking to do yet. 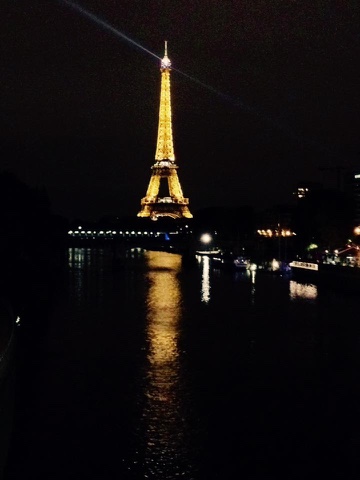 My plan is to travel far and wide in this glorious old city until it's time to turn towards CDG and home ... I'll have a bagful of stinkified clothes, no souvenirs to speak of, sore feet, and a head crammed full of sights and sounds and smells and tastes and the feelings of hot sun, cool breezes, rough stone, hard rain, crusty bread, sharp/cold wine, and sensuous cheeses and fruits. 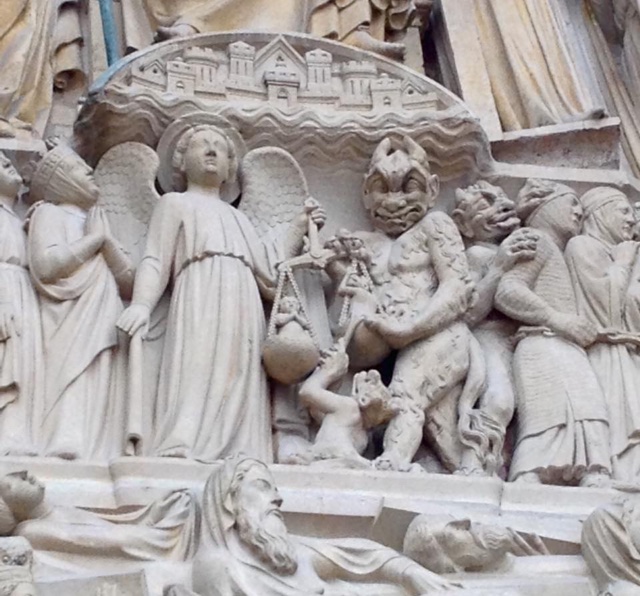 It was good and true and wonderful, even the parts that weren't.
Jamie 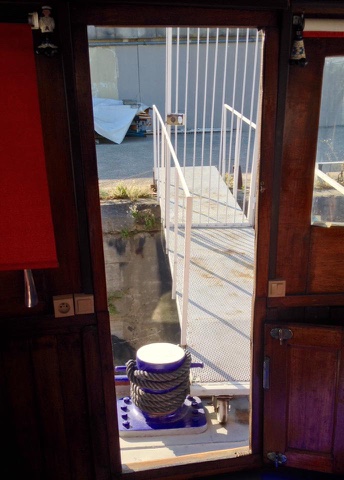 (the gangway linking our barge to land) 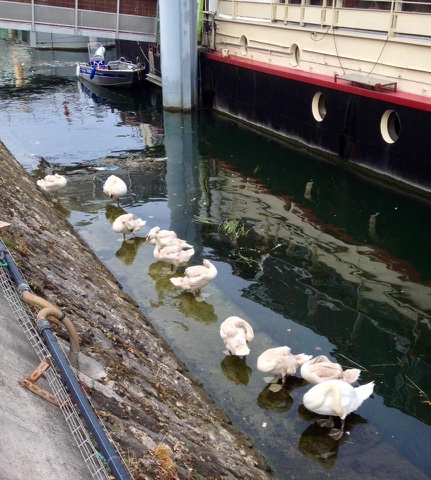 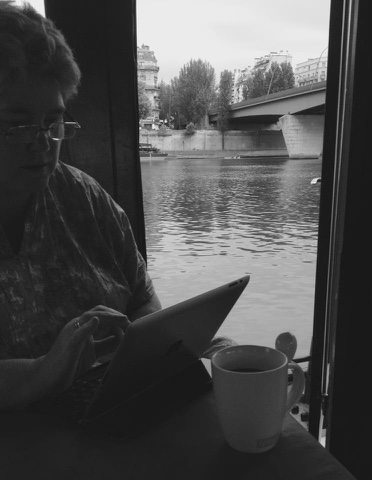 (Gail reading on a quiet morning on "Tortilla Flat") 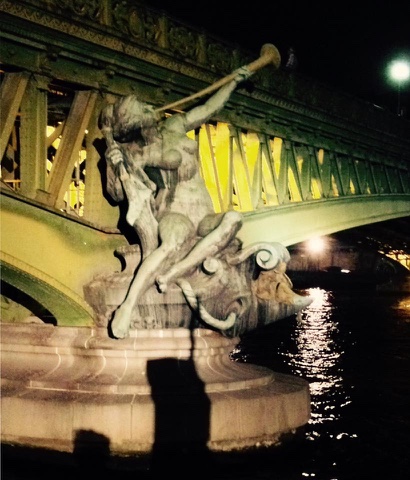 (details noted on late-evening walks along the Seine) 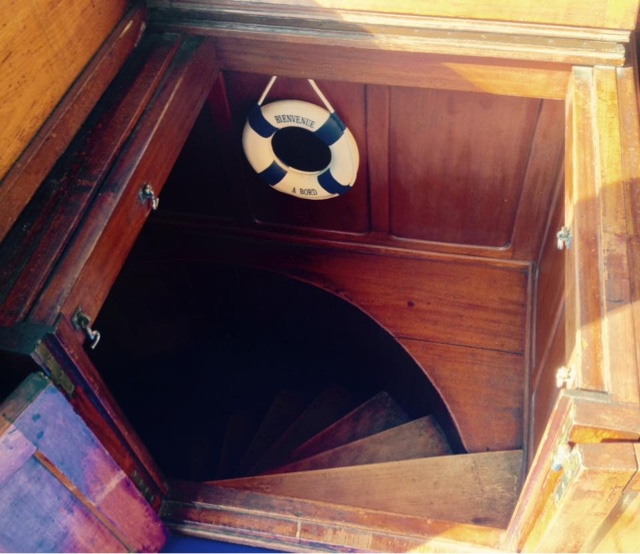 (you have to walk/crawl/climb backwards down this stairway to get to our cabin)
Posted by Jamie Sheffield at 4:46 AM